Welcome to the New Google Sites! 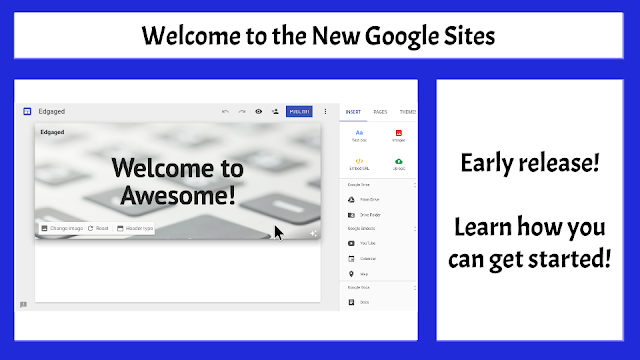 Toward the end of June, MSD of Steuben County gained access to the early release of the New Google Sites. It is a very exciting opportunity as our teachers can start to get a feel for how to implement it as a key communication tool and implementation in the classroom. Due to the upcoming changes, I've already canceled a training I had planned for a blogging template I had created using Google Sites. Now that there is a new version, I ultimately decided that it was a matter of time until that training would be obsolete. So I'm excited to present the new version of Google Sites to the administrative team on Monday, August 1st and teachers Thursday, August 4th.

MSDSC was also planning on utilizing Google Sites for school websites. That plan is now on hold as the transition takes place. So for now, teachers and administrators get to test and get familiar with the new format as we prepare to make the transition along with Google.

What's in the New Version?

I'm excited with this new version as it is much more user-friendly. Not that the old Google Sites was difficult, but some items were difficult to locate and operate. The new version features drag-n-drop objects and easily manipulated embedded items. What always made Google Sites great is the ability to embed items from Google Drive. This still remains, but even easier as users do not have to determine numerical dimensions. Embedded items (docs, slides, videos, etc) can be resized just like an image in a Google Doc with dots around the corners and edges. What is especially awesome is the collaborative nature of the new version. There is no need for saving as users can edit the site simultaneously with other users just like items in Google Drive. The site is essentially a living document with the appearance of a simple website.

Want to get started?

At the moment, the new Google Sites can be accessed via the address: http://sites.google.com/new. I've provided tutorials via an interactive Google Slides presentation so that you can pick and choose what aspect you need. I hope you find this resource useful!