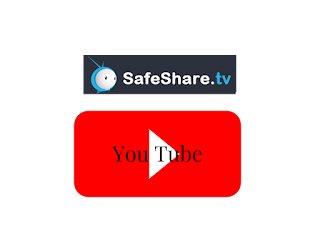 Youtube is probably one of the most valuable educational resources on the planet. You can find videos on any topic one can think of. I don't know how many times this unhandy man has been bailed out because I was able to fix something through a video found on Youtube. This is not groundbreaking, earth-shattering news. Just reiterating a commonly known truth.

I recently was asked if it was possible to trim a Youtube video. A teacher only needed a small portion of a very long video. Using Safeshare.TV, a teacher can easily select a portion of a Youtube video and have a shareable link to send to students via Seesaw or Google Classroom (insert your learning management system here.) By doing so, you have a trimmed version of the Youtube video, and you have eliminated all suggested videos after the video or off to the right side of the screen. This gives you and your students a nice embarrassment-free version of the content.

Another nice feature is the "Dim Lights" option when you are showing the video. It will darken the entire screen so that all buttons become hidden and the glaring white background is removed. It simply makes the video easier on the eyes.

Want to get started with Safeshare.TV? See the slideshow below.

This may or may not have anything to do with this post, but since this is a blog...I can share whatever thoughts. I had a funny scenario that I believed involved Youtube. I had a couple teachers in a panic because students were changing their grades on our electronic grade book. The initial thought was that they were hacking into our grade system. After asking a few questions, I realized the students were merely changing the HTML code to appear differently only on their Chromebook. They felt much better after I explained that the grades would appear normal after refreshing the screen. I'm pretty sure that Youtube videos like this one are the culprit.

So if your students are changing their grades...refresh the screen! :)