A Collection of Book Reviews

To take advantage of the technology rich classrooms that exist today, Rome City first grade teachers wanted a better way for students to share book reviews so that all students can have access whenever necessary. Using Shadow Puppet and Google Drive, this became an easy reality.

I first kicked things off by motivating the students to be expressive when they are sharing! We want lots of energy and great intonation when students make a recording. To help the students grasp this, I made reference to Fred Grote (local automotive dealer) as almost every student at Rome City has witnessed one of his commercials. In fact, here is a great example:


Next step was to have the students practice their book reviews in their best "Fred Grote voice". A good portion of the students really got into it as they prepared to record!

Before digging into Shadow Puppet and creating the performance, I had students take a picture of their book cover as well as their review. Being able to take a picture within the app would be a really handy feature for primary students. Taking the extra steps to snap a photo with the camera and get into Shadow Puppet may not seem like too big of a deal, but it would help the flow of the lesson if it were just a part of the app.

After students recorded, we had them get into the Google Drive app, go to the incoming tab, and upload their book reviews to a shared folder that the teacher created. (Click here to learn how to set it up.) The students' faces started to light up as their friends book reviews started to appear on their iPad. And of course I had to give them some time to explore and listen to some of the book reviews! The class was so excited to hear what their friends had to say. What an opportunity this provided to promote literacy and work on listening/speaking skills.


After I had made the sample video above, I suddenly received alerts from Shadow Puppet on Twitter and Pintrest that they had noticed it. It was quite a surprise as I had forgotten that my videos from YouTube were automatically posting to Twitter. This just adds a new dimension to the experience as it demonstrates the power of social media whether a post was intended or unintended. :) The students will be excited to know about the response that was received from Shadow Puppet as they did great work today. 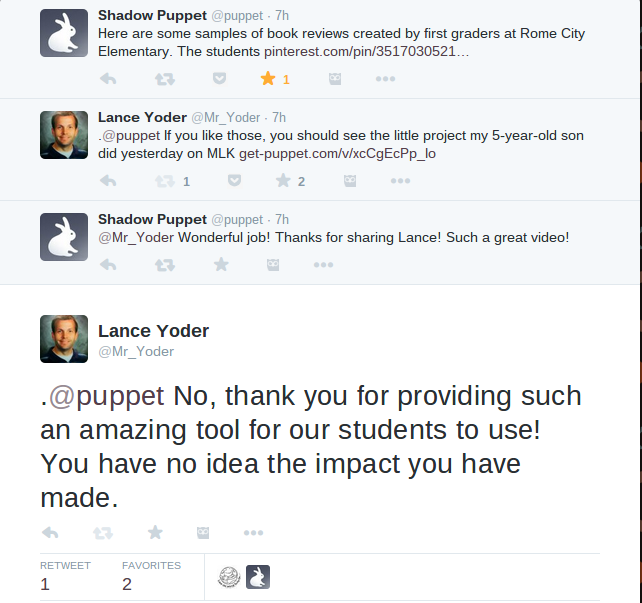