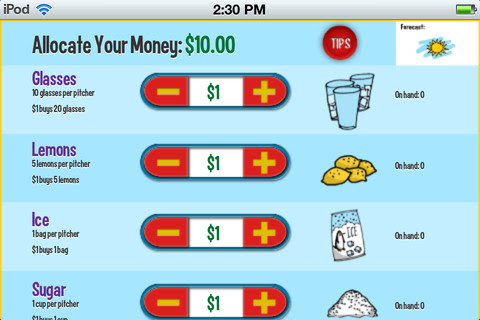 When I taught fourth grade, I did an entire math unit on Coffee Shop from coolmath-games.com. Students had to figure out how much it cost them per cup based upon the recipe they set for their coffee shop.  They would determine what price they could set based upon the recipe to maximize their profits. They had to also consider factors such as the weather. The kids really enjoyed this activity, and for many of them it really stretched their thinking to crunch the numbers rather than just play the game itself.

Setting a specific purpose for a game is powerful. Yes, the students could have very well played the game just for entertainment value. However, that would defeat the purpose of school now wouldn't it? I'm all for teaching the students to use these devices as tools instead of toys. I'm sure if you implement this sort of activity, you will have some students just want to play the game. Make it the reward for their achievement. Create a competition. Have the students use these critical thinking skills to figure out how to maximize their profits. There are lots of ways you can promote the activity to produce great results from your students.

Now, this whole time I have been focusing on the Coffee Shop from Cool Math. (I only used the coffee shop over the lemonade stand on Cool Math because the graphics were better.) I bring before you alternative for the iPod and iPad that uses a lemonade stand as the platform.

This activity could also fall under Social Studies as it would meet multiple levels of elementary economics standards.