By Lance Yoder April 24, 2012
Math is Fun is a great resource for students and teachers alike. It provides numerous tutorials on math concepts as well as interactive examples. (Most of the interactive tools do not work on iOS devices.) I came across this site because I was listening in on a lesson in a small group. There was some debate upon the different types of triangles (isosceles, scalene, equilateral, etc.). Not only did this site clarify the definitions of the triangles, but also provided interactive examples to change the degrees of the vertices and length of sides. Part of the reason I like this site is that it is pretty straightforward. There isn't the huge distraction of flashy games or advertisements.

One simple way you could use it is by sending the link to concept you would like the students to use as a reference tool. For example: Mrs. Sibert contacted me today asking for supplemental resources on fractions. I sent her the direct link to this page so that she could send it to her students as well. Now her students can create a homescreen button and refer to it throughout their fraction study. 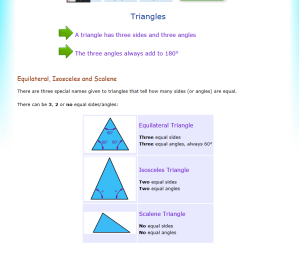 [caption id="attachment_47" align="alignnone" width="300" caption="An example of an interactive tool. In this example, students drag coins over to match the dollar amount."] 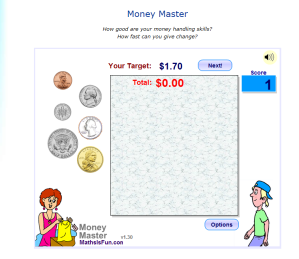