This first three days of school have certainly been interesting. Zack and I have been attempting to load apps and make sure all classes have an accurate count of devices per student. This is difficult due to the ever changing numbers that come in and out of classrooms (especially at the beginning of the year). I know those frustrations for you as teachers. Some stability would feel pretty good right now, right? I'm finding (as I've entered this new role as a peer coach) is that the same desire for stability exsists in the tech department.

Other challenges we are facing is the devices just not loading apps correctly and also the drag on the network. Yesterday, as I was sitting between two kindergarten classrooms, I could tell that almost every kid that had a device at South Side was using it. The lag on download speed was without a doubt felt. (That wasn't necessarily a frustration...more of a comfort in knowing it was being used.)

Hopefully soon Zack and I will be getting more materials out to the teachers. At this point, we are just trying to overcome the obsticales of new technology and get the devices into the hands of students as fast as possible. 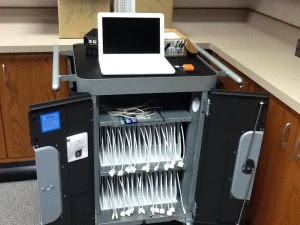